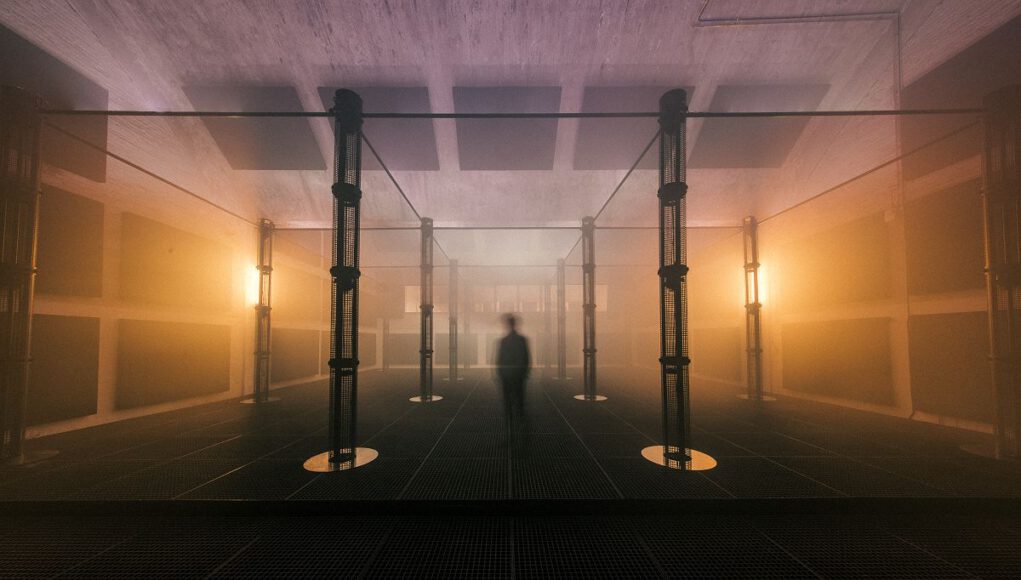 Berlin 2020 Monom Studios, SONIC CINEMA will showcase a new form of cinematic experience – the Sonic Film. An augmented sonic reality experience created with 4DSOUND’s audio hologram technology – monoms Sonic Films places the listener in the centre of rich sonic worlds that can be freely explored. monom will host 4 identical Sonic Cinema sessions per day. Each session goes for 2 hours and will showcase 3 sonic films. Guests will be free to move around the studio keeping 1.5 m distance. VERY LIMITED CAPACITY of 36 people per session, considering the current health guidelines.

For the pleasure of everybody, we ask guest not to leave during Sonic Films and do so instead at the 15 min break between films.

Ticket Information:
Price : 12 EUR (Each ticket gives access to one session and also to the monom lounge that will be running
until 23h – respecting the current restrictions on capacity)
Tickets link
—-
SONIC FILM SESSIONS

Lost Spaces –
The first two Sonic Films in the Lost Spaces series explore the two largest living symphonies of our planet; the rainforests and the oceans – home to over 90 percent of all living beings.

Lost Spaces: Oceans (30m)
A journey from the city, out to sea and then deep into a subaquatic oceanic world, Lost Spaces: Oceans submerges the listener in an enchanting, surreal and rich bio-acoustic environment – a pristine subaquatic life, invisible to most before morphing into the harsh reality of today’s subaquatic sonic ocean-scape.

Lost Spaces: Rainforests (30m)
An enchanting, haunting and at moments terrifying composition of sound, music and voice, the first iteration of Lost Spaces – Rainforest is divided into stages based on falling into and out of synchronisation with nature. The audience will be taken on a journey connecting human emotions to the dynamics of natural phenomena immersing the listener in the rich sonic environments of rainforests from around the world – home to more species than any other environment, spaces and life that we have lost forever, and ones that are on the brink of destruction.

Continuing our mission to explore the possibilities of spatial sound as an expressive medium, MONOM is excited to continue its series of SONIC CINEMA. Cinema from the greek word kinema – to move. Since the invention of cinematic technology, which freed the image to move to give us the ability to bring our imaginations and dreams to life with unprecedented realism, Cinema has arguably influenced culture more than any other medium in history MONOM’s SONIC CINEMA explores new forms of cinematic experience – the Sonic Film. MONOM’s Sonic Films, which are an augmented sonic reality experience enabled by 4DSOUND’s audio hologram technology, will provide a framework to create and tell stories that can directly reflect the detail and multidimensionality of human perception – one that is constantly moving and in flux. Working without defined boundaries of the visual sense, this pure sonic experience opens up new realms of
possibility for narrative creation and embodiment where the only limit is the imagination.

____
MORE ABOUT LOST SPACES
Conceived by MONOM’s Creative Director, William Russell, Lost Spaces is a Sonic Film series that aims to increase empathetic awareness between the audience and natural environments through the documentation and transmission of its natural beauty and its destruction. A series of virtual sonic reality experiences, recreate in rich detail the sonic environments of some of the World’s most beautiful and life rich natural ecosystems. A journey both sonically and emotionally, these environments and different scenes taken from all over the world will be infused with music and frequencies aimed at stimulating each listeners‘ imagination – internal visions overlaid with individual memories and experiences. Storytelling is a powerful medium for expression and communication – a means of increasing social empathy, historically acting as an engine of social/cultural liberalisation and change. Mediums such as the spoken word, pictures, writing, film, music and sound – have all been used to enhance the power of storytelling, to help transmit knowledge, to guide us from the old world through the threshold into a new world of understanding and awareness. Lost Spaces has been created using a technology built by 4DSOUND which enables the production of sound holograms: highly vivid, spatial appearances of sound that enrich, augment or transform reality as we perceive it. The series uses this immersive sonic technology together with the art of storytelling as a tool to increase awareness of humans inseparable link to the natural environment and help heal the collective trauma of the extinction of life as we have known it. The first two Sonic Films in the Lost Spaces series explore the two largest living symphonies of our planet; the rainforests and the oceans – home to over 90 percent of all living beings. From forests in Finland to the Amazon rainforest, the great barrier reef, to the seas of Sri Lanka from the wetlands of Africa into the Andes mountains, the series will also serve as a hyper-realistic audio map, a sonic archive of these life rich natural spaces that humanity may lose forever.