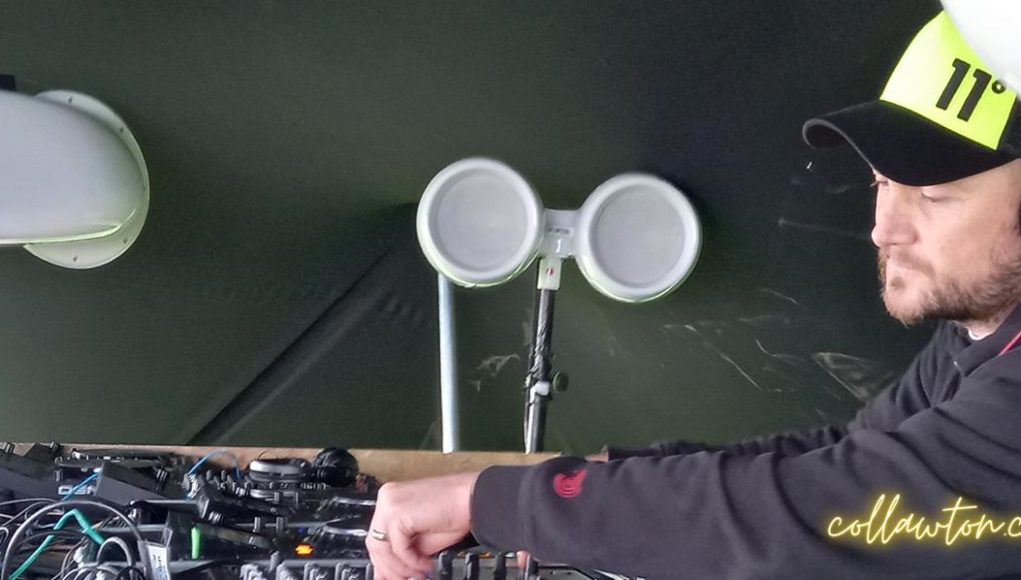 Wie handhabst du Musikwünsche?
How do you handle music requests?

Well if I am playing a night and it’s a deep house night if they don’t ask for something that is deep house it’s not happening!!! But if it’s a Col Lawton Headlining gig and they request a Col Lawton let’s get it on and get dancing!!! BUT…. if it’s a house night and your asking me to play Duran Duran or that old disco track that goes do do da!!! It isn’t happening lol….best to just say yes see what I can do and keep them on the dance floor until the light bulb moment comes and they realise Duran Duran just isn’t coming on….. lol

Was tun, wenn denn Equipment streikt?
What do you do when equipment goes on strike?

Over the years I have had many a malfunction to the point it has happened so often to me and my label team deep fix recordings we actually have a 5th member of deep fix called Mal-Function he always turns up messes with the decks or the sounding so it’s a case of keeping calm. Had moments when one decks has lost power in a middle of a festival but the other is still playing many loops and effects later the broken deck gets fixed mid set and you carry on but I have had gigs when the power has gone off just a case of laughing it off maybe start a sing song get the crowd involved try to make light of the situation.

Was sind deine musikalischen Einflüsse aus der Kindheit?
What are your musical influences from childhood?

I am a 80s child, I love 80s music and still listen to 80s music everyday my ear found music in the 80s but then I was influenced in the 90s by pop culture in the UK then found House music earl 2000’s so I was late to the house music scene. But for music influences as a child I was listening to whatever my sister was listening to as she is near on 10 years older than me so when she was dancing in her room to the likes of Wham & Erasure I was listening through the walls then I discovered the likes of The Police & The Jam then I found Chaka Khan & Steve Wonder then Michael Jackson mind blown by amazing sounds and lyrics it was a special time in my life saving up my money to buy new tapes, records and CDs at the weekend.

Lässt sich über Musikgeschmack überhaupt streiten?
Is it even possible to argue about musical tastes?

You would be mad to try!!! We are all individuals with different tastes and likes and this is how it should be music is expression or an extension of who you are as a person you can tell a lot by what music tastes people are into I just know my taste is all over the place I just love music and this feeds into my producing I don’t stick to one style I stick to sounds that I like and what I enjoy my own tastes.

Welcher Track würde bei deinem Einzug in dein Box Match laufen?
Which track would run when you moved into your boxing match?

Phil Collins ‘In The Air Tonight’ one of my favourite tracks of all time pure track of build up and energy full of emotion stick this on and I’ll be ready to fight the world.

Welches war der schlimmste Job den du jemals hattest?
What was the worst job you ever had?

Had so many jobs my back history of work is a bit crazy from being a professional footballer in my early years to now being a successful music artist. One job that does jump out back when my football days ended due to injuries I took a job in a toilet roll factory which I lasted no more than 2hrs this work was just not for me I don’t think I was cut out for factory work I like to use my mind and do meaningful things but this job did teach me to work harder and to want to do more for my life.

Beschreibt deinen Sound jemandem, der dic noch nie gehört hat.
Describes your sound to someone who has never heard it before.

I love having a diverse sound this is something I wanted to make sure I did when starting out with music my sound being whatever comes from my heart I describe myself as being a Deep/Jazzy/soulful/Lounge sound with a slice of Funk! My sound can be a Sunday afternoon wine bar to a VIP pool party in Miami or a dark deep house night in the back room of the club. But what I do know my sound is something you can play and enjoy and hear the story in the music I am very big on making music with a story my 2 albums TWENTY2.1 & TWNETY2.2 are a double album story talking about my 20 year music journey in album 1 to the future evolving sound in album 2.

Hast du irgendwelche guten Tour-Geschichten auf Lager?
Do you have any good tour stories from clubs or festivals?

One that stands out in my smoke machine malfunction!!! Playing in Peterborough UK back in 2020 with my good friend Robbie Robinson we played this brilliant night crowd was amazing one of them great nights in a club when everything is going well I am on the decks I am dropping in Deep Soulful house vibes and the smoke machine comes on….. smoke starts to fill the dance floor and slowly the crowd disappear into a cloud of smoke I think nothing of it as I am concentrating on the decks… the smoke gets more and more and more and I am like dammmm where did the crowd go I can see shuffling going on through the smoke and then 10mins later the machine turns off very slowly the smoke starts to drift away I notice the emergency exit doors are open bouncers are panicking smoke alarms are beeping but guess what … the crowd were still there still dancing but laughing and coughing ha-ha so what do you do….like a true pro you carry on mixing ha-ha

Was würdest du machen, wenn du kein Musiker wärst?
What would you do if you weren’t a musician?

I still work now….I may be a musician but I still work as I love working and helping people I help people with music but I also help people with Health problems my life has been all about helping others no better feeling then helping and supporting someone. I did have my dream job when I was younger a professional footballer so I have been lucky to work and do things I am very passionate about. If I wasn’t doing music I know I would be something around sport or fitness or learning something new.

Welcher Musikstil sollte am meisten Anhänger haben? Und warum?
Which style of music should have the most followers? And why?

Was ist die wichtigste Musikequipment-Erfindung aller Zeiten – und warum?
What is the most important musical equipment invention of all time – and why?

The one that is natural, the one that if you have it you are a super star in my eyes and I wish I had this instrument in my life…..I would have to pick the vocal chord…. the ability to sing and to sing well is the most important bit of kit. The talent of a great singer is something I always look for I love finding singers who can move a room with a single note. Vocals are something I love to have in my music I have been lucky to work with many great singers who use their vocal instrument to take my music to that next level what I would give to be able to sing.

Was würdest du raten, um sich als Profi durchzusetzen ?
What would you advise to become a professional?

This is a process that takes dedication, hard work, listening, learning and being confident in your work but being confident as in being humble and respectful for the industry you are working in. Might feelings for becoming a professional in anything is you need to gain the respect of your peers and the professionals you are trying to join by listening to others in the industry taking advice on board and finding your own way to make it.

I never see myself as a professional in music far from it I am learning just like everyone else but learning how to be as good as I can be with the skills I have got. But as in everything you need to give all your time and energy to be as good as you can be I know I am on this journey to get as far as I can with music so when it ends I can sit back and enjoy the achievements I managed to gain by working hard.