2012 is the 20th anniversary of Raindance Film Festival and Raindance wants to share it with you. 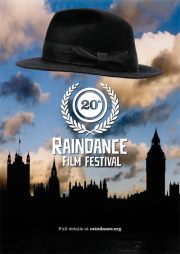 Take a look at the schedule:

Thu 25th Oct.:
19.15 99 Minute Film School
Take a lightning quick tour behind the camera and the projector and see how the film industry really works with the founder of Raindance, Elliot Grove.

Sat 27th Oct.:
10.00 Low to No Budget Filmmaking (Part I)
This is the class taken by Edgar Wright, Christopher Nolan and Guy Ritchie. Learn how to realise your dream film with little or no money and leran how to put value for money on teh screen.
20.00 Feature Film: ORANIA (documentary)
plus short film pre-program
22.00 Raindance Party

Sun 28th Oct.:
10.00 Low to No Budget Filmmaking (Part II)
In Day 2 of this inspirational and information packed course will show you how to get your film out there, how to make money, and the tricks professional filmmakers use to turn their film into this years cult classic.
19.00 Feature Film: PERCIVAL’S BIG NIGHT
plus short film pre-program

Details about the films and events on www.raindance.co.uk/site/best-of-raindance-berlin