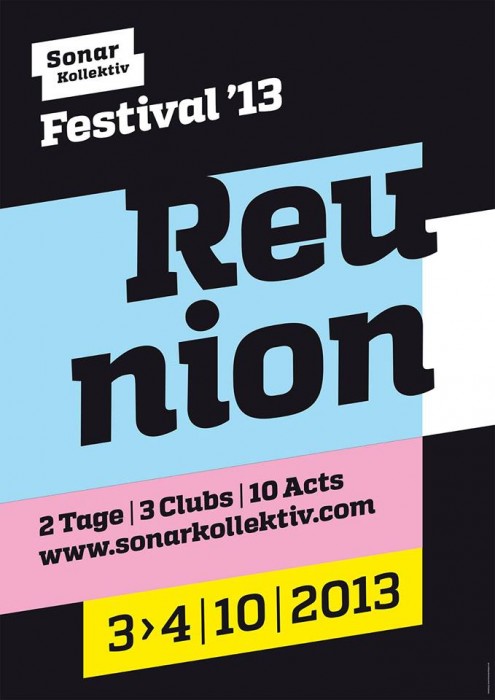 Precisely one year ago SONAR KOLLEKTIV celebrated at the same exact place, the Volksbühne Berlin, its 15th anniversary on a grand scale. Now, in 2013, the ante is raised with the first SONAR KOLLEKTIV FESTIVAL – to herald the start of the next 15 years. Since the Berlin quality imprint shines with a new livery. The logo has been revised as well as the website has been transformed to technological state-of-the-art. And how vigorous SONAR KOLLEKTIV’s stable is set up musically can be marveled at the REUNION festival impressively. In its 16th year the label still or even more than ever guarantees for an unparalleled range of good music across all genres and audiences.

The newest project of the Jazzanova live band, „Red Desert“ will be presented in Berlin for the first time. The band add its distinctive electronically infused Jazz sound to the masterpiece „Il Deserto Rosso“ by Michelangelo Antonioni (Zabriskie Point, Blowup). In his first colored movie Antonioni shows a visually stunning, dark, industrial world in an abyss of despair (with the astonishing Monica Vitta as the leading part). Jazzanova now brings this apocalyptic vision from 1964 as an audio-visual adventure into the here and now.

Jah Wobble probably needs no further introduction. The founding member of Public Image Limited (PiL) is one of the most venturous and influential musicians of the last 35 years. And now this living legend releases together with singer PJ Higgins his newest (and 34th) album on SONAR KOLLEKTIV! The English bass paler, singer, poet and composer and the credo of the label totally match for their lack of reserve towards everything new. His gig at Volksbühne is the concelebration of this new liaison.

A true show-stopper at last years 15th jubilee was the concert of FETSUM. The sublime Soul voice of SONAR KOLLEKTIV just recorded his sophomore album in Barcelona and now returns to Germany with new material in his luggage. He will perform some of these new songs at the festival for the very first time.
REUNION, the name of the festival, not only derives from the fact that the SONAR KOLLEKTIV family presents itself to a bigger audience assembled and united once again. It’s also a reference to the homecoming of Jazzanova member and A&R manager Alex Barck after a year spending on the island La Reunion in the Indian Ocean. On the occasion of the festival he will also present his debut solo album „Reunion“. And with Jérémy Labelle he even brings a guest along from the island. A man who will bewitch us with a fascinating mixture of African tinted folk and electronic world music from a place far far away.
The DJs in the Roten Salon will make sure the right dance music will be on: The Jazzanova DJs (Alex Barck, Claas Brieler and Juergen von Knoblauch) as well as Paskal & Urban Absolutes will play all night long the typical SONAR KOLLEKTIV sound. In other words, music that delights, no matter which region of the world, crate, genre or year it comes from. The next 15 years of SONAR KOLLEKTIV have begun by now.

Whoever wants to fetch the new SONAR KOLLEKTIV logo and some new music home will get the exclusive „Sonar Kollekting“ compilation to take along. There are some surprises, unreleased tracks and future releases collected. The special festival edition is available in a limited edition on site.