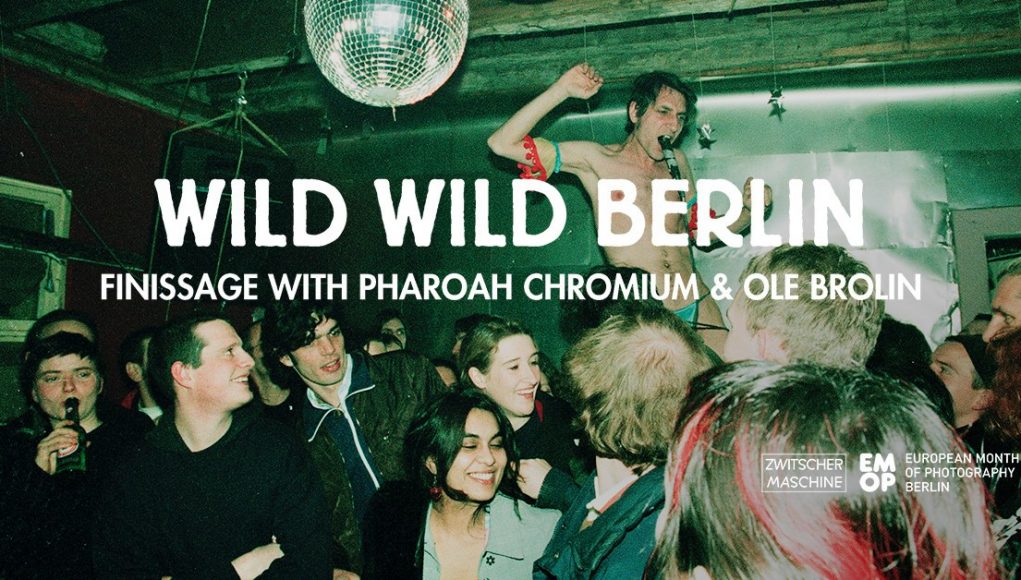 FINISSAGE:
Sun 23.10.2016 from 5pm
From 7pm: Live-Performance by Pharoah Chromium and Ole Brolin

​We are proud to present the first collaboration between Pharoah​ Chromium (a project by Ghazi Barakat) and Ole Brolin (Pennersonic)!

PHAROAH CHROMIUM
Pharoah Chromium is a project by German-Palestinian musician and performer Ghazi Barakat and was named after a song of the band Chrome. The project draws inspiration from diverse sources: free jazz, rituals from ancient past and near future, the dream syndicate, science fiction novels and neo-brutalistic architecture.
He has released albums on Grautag records, Deep Distance, Labelle 69 and collaborated with Günter Schickert, Vincent Epplay among others.

OLE BROLIN​
​is a Berlin-based musician from Sweden who’s often seen performing under the moniker ​“Pennersonic“ or „Penner Audio“. Apart from being a musician he’s an experienced sound-engineer and electronic tinkerer who’s known to work with self-constructed instruments and amps. His work includes collaborations with Solistenensemble Kaleidoskop.

Three photographers present three decades, three views and three visions of Berlin at its wildest: streets, chaos, art, pop music, the subculture. Everything is forever in motion in Berlin, constantly shifting into ever-new constellations like in no other city in the world. Artists, squatters and hedonists of all stripes aren’t looking for commercial success and resist adapting to the established. The Here and Now informs this city’s spirit and contributes to the creation of Wild Wild Berlin.
Miron Zownir (born 1953) is one of the most radical photographers of our time. He photographed in major western cities and Eastern Europe, capturing society’s outsiders and providing piercing insights into various subcultural circles. Eva Otaño Ugarte (born 1964) investigates the interface between documentation, art and concept, photographing the underground scene of Berlin’s borough of Mitte in the 1990s. Sebastian Mayer (born 1973) is a photographer who focuses on portraiture and architecture, and while his artistic works use photography as the predominant medium, it also involves film, painting and drawing.

What Miron Zownir captures in his pictures in the 1980s are marginal, rebellious types who see themselves at odds with a saturated society that has become stuck both in the East and the West, and which generates leaden inertia. Add the insular situation of Berlin’s Western half: it is in this (sub-)culture that a biosphere of near paradisiacal detachment from economic necessity and exploitation interests evolves. West Berlin lives a surreal existence as capitalism’s showroom window, with quasi socialist subsidization – and with an unmarketable artistic overproduction that’s met with condescending smiles in Frankfurt, Cologne, or Düsseldorf. “Wildness” is a statement against the diffidence of a post-modern society, one which bears traits of autism.
In her photographs Eva Otaño Ugarte documents the “possibility spaces” (and the acting personnel therein) which develop once an overregulated political and social model disappears, in which abruptly the unregulated, the free and the wild can try themselves out for the time being. Such spaces evolve in many hubs of the formerly socialist part of Europe, yet only in Berlin the immediate confrontation between two worlds with its pertaining social and cultural synergies is possible; only in Berlin such a multitude of experts in the appropriation and temporal use of public space are at the ready to immediately realize sub-cultural concepts, and nowhere else is the destabilization of official structures and representatives more pronounced than in the Eastern part of the newly emerging unified Germany. The early 1990s are marked by an escalation of “wild”. Being “wild” is inescapable, is unavoidable.
The, at times heroic, attitude of the people in Sebastian Mayer’s photographs is one facing a comprehensive commercialization of the “underground” project. In the early 2000s the slogan “Arm aber sexy” (Poor yet Sexy) describes Berlin’s brand essence. Meta events such as Pop-Komm or Bread & Butter are to establish at long last the economic potential of pop- and sub-cultures in Berlin as well. The deregulation of European air traffic does its share, as it provides the booming party and club circuit with a constant influx of new customers. Berlin’s autochthonous “scene” – or what regards itself as one – represents biodiversity and receives endangered-species status. Wildness gives way to permanent excitation, and that creature is a doggie in need of being walked on weekends.
Today now, in the late 2010s, when the “wild” assaults us at all levels political and social, and keeps us panting, the years reflected by the exhibition WILD WILD BERLIN seem to be an idyllic place fallen out of our time, when our very own post-colonial nightmare catches up with us.