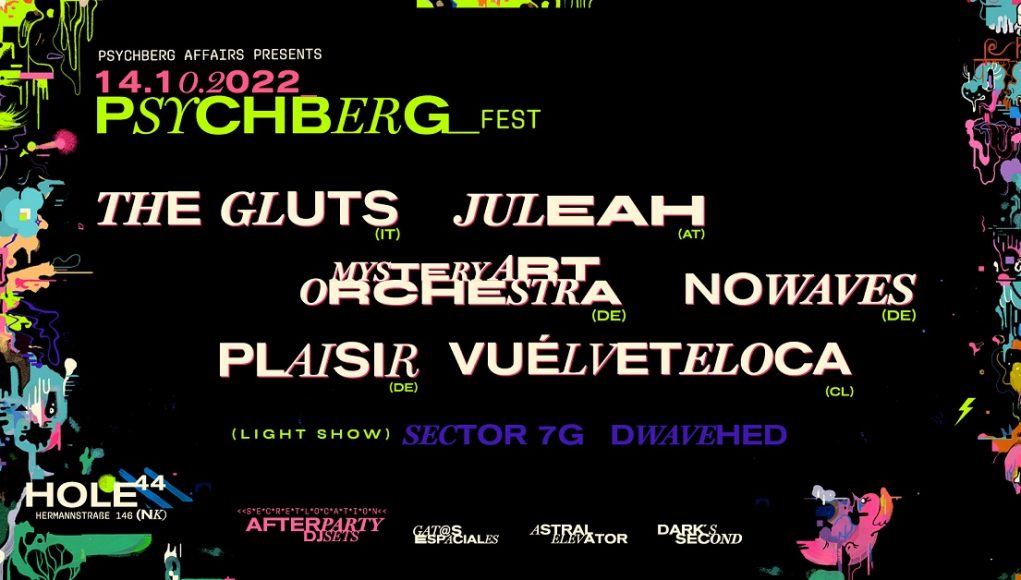 Plaisir
Blended from the dreamy fuzz of shoegaze and the stripped- down, low-fi aesthetic of coldwave, Plaisir seeks to create darkly seductive soundscapes infused with gentle spoken word and surrealistic melodies in English and French, backed up by noisey guitars, a steady throbbing bassline, warm shimmering synths, and a chilly minimal drum machine beat. The three members, Camille Haimet (FR/USA), Carla Cixi (IT) and KC Dahlehan (SE) , all met and started writing songs together in 2019, resulting in two well received EP’s – Sap (2020), and Foam (2021).

Mystery Art Orchestra
Mystery Art Orchestra is a band that blends musical realms both in their stylistic and in their temporal objectives. Clearly nurtured by the electronic dynamics of post-punk and cold wave the band’s approach never freezes – by contrast it’s lush, ever evolving and full of colours. Tino Bogedaly (voice & guitar), André Wlodarski (keys & electronic bass) and Bastian Müller (drums & percussion) form acoustic synergies equally challenging in their technically demanding practice yet comforting with strangely familiar patterns alike. Ethereal guitar chords frequently hint at strains of romanticism only to be broken up by the steady rhythm of lucid drums, a bold synthesizer and sonorous singing. There is momentum, there is ecstasy, there is depth.

The Gluts
Excess, surplus, too much, saturation, overkill, overload… they are all synonymous of GLUT. Too much of good things, in slang. This is THE GLUTS, a powerful overloaded psychedelic rock. We like the punk attitude and the DIY, and of course we are proud to have heard someone say: “They are the LOUDEST band in Milan”

Juleah
The idyllic, inspiring environment of Austria’s Vorarlberg region is the creative center for Julia Hummer and her band. Three full length albums have been recorded here since 2012, sparking an international fan base that is still growing. Juleah is a solo project founded and shaped by Hummer, supported on stage by Henry Galehr on guitar, Christoph Gallaun on drums and Oliver Huber on bass. Blending the bluesy rock & roll of the Brian Jonestown Massacre and Black Rebel Motorcycle Club with the shoegaze decadence of Ride and Slowdive, Juleah has found its trademark sound in sweet but sultry vocals and the depths of reverb-soaked guitars. While remaining steeped in omnipresent psych leanings, Juleah has delicately perfected the art of genre reinvention, taking heed of everything from the snarl of southern guitar riffs to the shimmer of surf rock.

Their first LoFi-LP Immaculate Protection released in 2016 remained some secret underground tip for fans of Television Personalities or similar off the radar bands from the 80s. If you believe Trust Fanzine, they recorded ther second LP in a toilet filled with cotton wool and fell asleep. Anyways, the record Good For Health – Bad For Education shows off a garagy, but also dark and melancholic sound. The shows at Fusion Festival or their support for Sleaford Mods have brought them to a wider and more diverse audience. With their third LP Odd Secrets the band made a step into Pop music without losing their credibility as a punk act. It plays with hooking bass lines and drums that seem to be created by a human clockwork. The synthsounds are sent directly from outta space and on top, you will hear a warm comforting and sometimes beachy guitar sound along with the recognizable distorted voice of their singer. If the earlier work already created memorable tunes, the recent release puts the cherry on the top with catchy anthems that leave you in melancolic dance moves and creates a warm homecoming feeling that makes you want to listen to it again and again.

DJ from Manchester, UK who will be playing the best of psychedelia from across years with smatterings of post punk and garage rock thrown in for good measure.

Disk Jockey/Selector/Promoter & Co Founder of Psychberg Affairs.
Playing all the amazing music out there that catches his ear is what he enjoys the most. Discovering what’s new and what was done to take us where we are today.