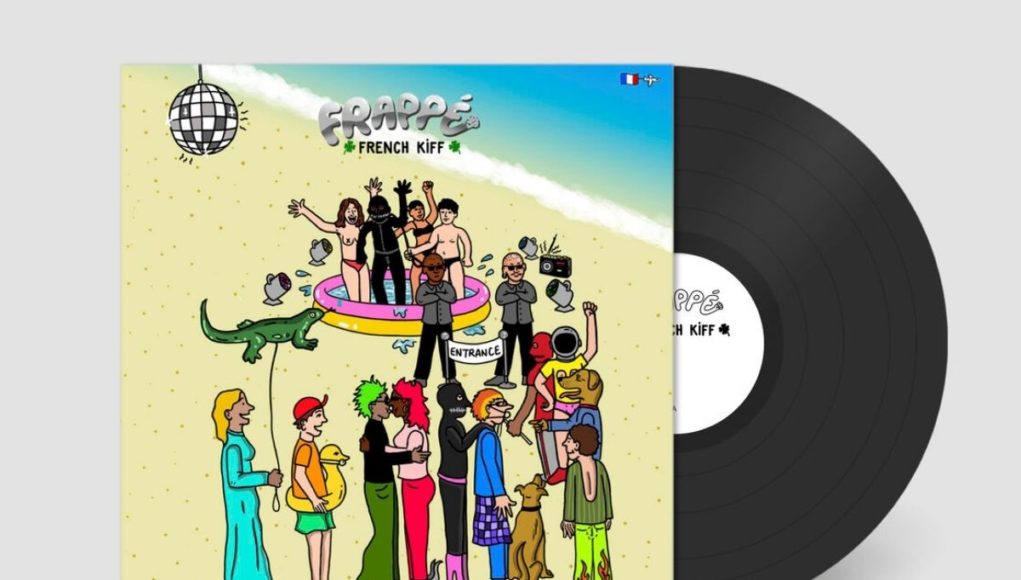 We started Frappé about 18 month ago now, it was officially launched in January 2020 right before the pandemic, we did really well with that (laughs). We (Ten Fingerz and Basile de Suresnes, the label Co-fonders) had been DJing in Parisian bars and clubs for over 3 years and Basile was already producing music : we thought the timing was right to start something new and get properly into producing music and get to the next level. We had this desire to produce the music of artists we love and also put our own music out. So we got started, we set up the label and released « Fête en l’air » the first VA in may last year.

We’re into our fourth release now with French Kiff coming out on May 14th. 3 of them have been released in vinyl as this is a format we absolutely adore, we have this will to get the Frappé music on this format and make nice-looking front and back covers (they are two sides of the same story the cover tells). We want our records to sound good, but also look good. We’re hoping we’re managing to do both, haha ! The second release « Roller Cluster » was digital only, it sold really well in this format, we’re hoping to make a special vinyl edition in the coming month, maybe just a 100 copies for the diggers.

Our record are sold all over Europe through our distributor, people can find them in shops in major cities. But we also sell them on our Bandcamp and for these we ship them ourselves : we have shipped nearly 200 vinyls in total so far and we’re always very touched when someone orders directly with us.The one shipment we’re most proud of : we’ve sent the third one « JTEKKEN » to Laurent Garnier Himself, which made us super proud of ! As he is a great inspiration for us, so much so that we paid tribute to him on the back cover of the record (will you spot him on the back cover ?). So we were over the moon when he accepted us to send him a copy of this ONE

About half of our orders come from France, but we’ve had people from Australia, the US, Danemark, Scotland, Germany buying our releases, which we’re super pleased about ! The UK and Germany are actually the two countries from which we get the most orders after France, so we take the oppurtunity here to thank all the German folks who have supported us so far. And to Thank you guys at the ClubMap, as you’ve followed our releases and talked about them since the very first one a year ago !

It’s a difficult one to answer, as we put our heart and soul in every single one of them. We’ve had the luck to work with great artists who are also great people and have provided us with fantastic music. From Art Of Tones, to pir friends from Tomasi, to Deborah Aime La Bagarre or Robby or Stupid Flash, but also Madcat, George and now Naux, Groove Boys Project and Mark Blair on the new one. They’ve all greatly contributed to what we’re trying to make with Frappé and we want to thank them for believing in us and the project.

We’re super busy these days, as we have some more music coming out before summer and are prepapring our releases for the end of the year too. We can’t say too much at the moment, but there will be some nice surprises. We spend time organising the collaborations with artists, feeding our social networks with cool content, working on promo, shipping vinyls. When we’re not doing this, as we’re also part of the artists on the releases we spent our time making new music !

Frappé is run by Basile de Suresnes and Ten Fingerz on a daily basis. We’re DJs and music producers, but have both started with DJing. We guess it’s something one can hear on the label’s releases and on our own tracks : we aim to make music for the dancefloor. Because this is where we know the heart of electronic music beats and this is where we have so many great memories, at the decks or in the crowd. We’re hoping to get back behind the decks very soon to to play the Frappé music to people as loud as possible !

Our music is availabe on our Bandcamp, if you order there we’ll carefully wrap the records for you and will send it over from Paris with love :p

For worldwide physical and digitaldistribution, we work with Chat Noir / Kuroneko : our music is available on all the major platforms (Spotify, Deezer, Apple Music) and also on Beatport and Traxsource.

Traxsource has been very supportive over the last releases actually and we’ve had the luck to get into their best-selling charts with the Art Of Tones track on Roller Cluster, for which we reached the TOP20, a big achievement for us !

We’ve used Youtube mainly for premieres and it worked quite well, with some tracks reaching over 10 000 views. We were lucky enough to get support from hcannels like Gazz696, Maslow Unknown, Les Yeux Orange, Bolting Bits and EELF.

This is really not the way we consider would be good for us to get our music out to people and make our name known, so the answer is a big NO ! Luckily for us, some great SC channels have supported us : like Le Visiteur Online, DJ Mag ES, MusicIs4Lovers, Les Yeux Orange, Moskalus. They’ve all decided to share our music to their community, we think it’s a better way to reach out to people who may enjoy what we do. Jon from Le Visteur has been terrific with this, so shout out to him for believing in us from day 1 !

We’re DJs, so we’re constantly hunting for new new music we’d like to play in our sets. When we spot somene who sounds really good and if what he does can fit with one of our projects, we get in touch with him or her. Some people also show interest in sending us demos and we always listen to their work (even though we have not yet produced an artist who has contated us like this, but maybe one day !)

We think this problem is much bigger than just for us as an independent label or as independant artists. The share artists and labels get from these platforms is ridiculously low. It’s nice to be out there with the big names but nobody really gets any sort of revenue from streaming, unless you manage to get hundreds of tousands of streams. Which is very very very hard to achieve. Yet it’s the way more and more people now listen to music, even dance music, so you can’t really do without them if you want to broadcast you music to the largest audience. Some people are rightfully starting to question this model and we’re part of them. We’ve heard that some talks are currently happening with Spotify about this, we’ll see where this goes, but a solution where labels and artist get more revenue from the music they make has to be found. Otherwise, apart from the fact that the deal we’re given is totally unfair, it’s going kill independnet music creation in the long run. Especially with this context where there is no revenue to be made from live events.

Would we play this track in our sets, does it get our feet stomping and head banging ? The answer has to be « yes » to this question for us to start considering to produce an artist. Even for the tracks in our catalogue which are bit less dancefloor-orientated, it has to have a certain sense of groove, something that gets you in the mood for party. That’s the Frappé DNA !

See our answer above, haha ! It really is about having a good time, partying, getting on the floor and dancing your ass off till the morning comes. As DJs we know there are many ways to acheive this and we also look up to great historical abels such as F Comm, Ed BAnger, Soma : these folks have all produced an array of music for the dancefloor. Their releases don’t all sound the same, but the aim is the same. That’s also what we’re trying to do too : cover different genres (French House, Jazzy House, Deep House, Break Beat, Techno), while always keeping in mind that this music is made for dancing.

We wander on YT, SC, Traxsource, Beatport, we listen to cool webradios, to the stuff people send us. Instagram is also good to find new talents.

We always appreciate the attenttion, of course, and we listen to all the stuff people send us. But if you want to grab our attention, send us a message in which we can see that it’s really us you want to talk to, that sending these partiular tracks to us means something to you and therefore could mean something to us. Sometimes we can tell people are just trying their luck a bit randomly or sending us the same email they’ve made for the other 20 labels they’ve contacted before us. It’s not the best way to get positively noticed by us. But then again, we’re only French, bad-tempred and arsy, so what do we know :p